In the stark shadow of 9/11, many otherwise patriotic Americans seem to have forgotten that the U.S. Constitution unequivocally guarantees our right and freedom to practice whatever religion we desire. From the high-profile protests against the “Ground Zero Mosque”* to the knifing of a Muslim cabbie in New York City and the Florida pastor who coordinated (and then cancelled) a Koran bonfire at his church, it's become all too painfully clear that America is afflicted with an advanced case of Islamophobia. Obviously, some of our fellow citizens are mistakenly equating the vast majority of peaceful mainstream Muslims with the comparatively small number of enraged jihadists who indiscriminately kill in Allah's name—turning all Muslims into potential targets of hate crime.
Islam and animal rights share at least one unfortunate commonality: the more extreme elements in both camps top the FBI's list of the most dangerous domestic terrorism threats facing our nation. Of course, the feds specifically bestow this dubious distinction on those who use violent and/or destructive means to achieve their ends, but in some people's minds, anyone who follows the philosophy of either Islam or animal rights is guilty by association of conspiring with the enemy—even if we would (literally) never hurt a fly. In that way, veg Muslims may be doubly suspect in a society that's still reeling from the traumatic impact of a shocking mass-murder nine years after the fact.
As an American and a human being, it sickens me to see anyone persecuted for their spiritual beliefs—as much as seeing animals tortured in factory farms and other industrialized death camps. I therefore feel compelled to stand up for peaceful Muslims, but as a secular agnostic, I would not presume to speak for them. It is in this spirit of solidarity that I present my exclusive interview with blogger, financial analyst and vegetarian American Muslim Fareeda Ahmed. 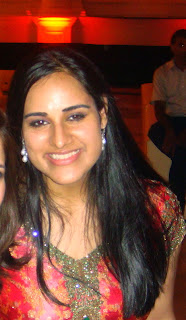 AR: Where are you from, and where did you grow up?
FA: I'm from New York. I was born in Manhattan and raised mostly in Westchester County, but I also lived in New York City for a number of years because I got my undergraduate degree at Columbia, and then worked at Morgan Stanley. My parents, on the other hand, were both born and raised in Pakistan, and came to the U.S. and got married after my father did his medical residency here. A lot of our family still lives in Pakistan, so I usually make a trip there every year. And I just moved to California last month to get my MBA at Stanford.
9/11 was obviously a pivotal point in American history and our relations with Muslims. Were you by any chance in New York City on September 11th, 2001?
No, at that time I was just 16—going on 17, as the song** goes—and a high school senior in Tarrytown, which is on the Hudson River about a half hour's train ride from the city. The entire school of about 400 students just so happened to be at an assembly that morning, and about 45 minutes into it, the headmaster interrupted to announce that two planes had been deliberately crashed into the Twin Towers. Our proximity to the World Trade Center meant that many of my classmates' parents and family members worked in or around there—my own cousin worked at the time for Morgan Stanley, sometimes in their WTC office—so the shock of that day was particularly personal for us.
How did you feel when you learned that the hijackers were Muslim?
I felt a strong dual connection to America and New York—my country and my home state. I was struck hard by the reality that they had both just been attacked so violently and viciously, while also realizing that this tragedy was going to dramatically change things for Muslims here in America and around the world. For me, and for many others I think, it marked the end of childhood. Speaking as a Muslim, it was the start of being defensive, because I've always been sort of an unwitting diplomat for Pakistan, which I consider a kind of second home. There, I don't have to explain myself for being Muslim, but here, I am constantly reminded that I follow a different religious faith from most Americans. And to complicate matters, Pakistan has a reputation as a hiding place for some of Al Qaeda's most wanted. Even though it's one of America's strongest allies in the War on Terror, and Pakistani soldiers and civilians die every day in the fight against Al Qaeda, the associations Americans have with Pakistan are often negative, unfortunately.
It seems like many Americans these days believe that Muslims, even those born and raised here, are somehow sympathetic to or supportive of the terrorists—like they're secretly celebrating when Americans are killed. Do you ever experience divided loyalties between your country and religion?