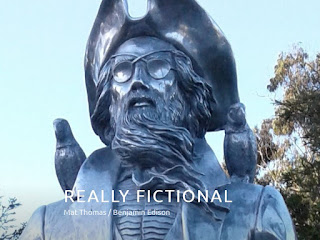 It's been over five years since I posted to AnimalRighter. In the meantime, I've continued writing: just not much about animal rights. So, just in case you're interested, I'm writing to let you know that I recently started a new blog called:

This was inspired by two key events.

First, 30 years ago, I had a visionary dream experience that I have never forgotten in which a mysterious, powerful, otherworldly voice clearly told me to write fiction under the pen name Benjamin Edison. You can read that story here, which will also help you understand what Really Fictional is about.

Second, Donald Trump's election to the Presidency seems to have ruptured the space-time continuum, making it much harder to tell the difference between reality and fantasy. Truth is under assault in ways that it has never been before in United States history. It's a psychologically dangerous and psychically damaging time. I have returned to fiction in an attempt to explore the boundaries between reality and imagination, stay sane and free my mind from the background noise of deception, lies and hate. And to have fun.

I used to write fiction in my teens and twenties, but regretfully didn't keep it up. Really Fictional is my late restart. If you do read it, and find my parodic psy-fi parables entertaining, I encourage you to subscribe. Then you will get email notifications when I publish new posts, which so far has been about once a week. And I'm always interested in readers' feedback.

Thanks, and happy reading,

On November 14, humor newspaper The Onion ("America's Finest News Source") officially named North Korean supreme leader Kim Jong-un their "Sexiest Man Alive" for 2012. The clearly satirical article made international headlines when The People's Daily, the Chinese Communist government's official newspaper, reported the story as 100% true. The article in their online edition was even accompanied by a 55-page photo spread of the 29-year-old super-stud in all his majestic glory.* 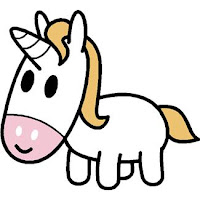 But when it comes to breaking hilarious "news" stories, The Onion's got nothing on the Korean Central News Agency (KCNA). Here's just one small example of their journalistic superiority. On November 29, the state-owned media outlet reported that the country's scientists have confirmed the discovery of an actual unicorn lair in Pyongyang, one of Ancient Korea's capital cities.

According to the Academy of Social Sciences, the phrase "Unicorn Lair" is engraved on a rectangular rock just outside the temple where they made their unbelievable discovery. However, this august scientific body has so far kept any physical evidence substantiating their fantastic find pretty close to the vest...in that they haven't publicly released any.

KCNA continually competes with the Weekly World News (WWN) to break stories that are simply too hot for the lamestream media to touch. Over the decades, WWN has gotten the inside scoop on many shocking exclusives exposing the secret lives of famous mythological creatures and famously ridiculous celebrities. For instance, they most recently reported on Bigfoot's three wives and the tragic explosion of Kim Kardashian's left butt cheek.

But KCNA has unparalleled access to incredible, often surreal developments within North Korea's heavily guarded borders: especially when it comes to the country's leaders. For instance, KCNA has previously reported that Kim Jong-Il, the former supreme leader (and Kim Jong-un's father) accomplished many superhuman feats. Just for starters: he walked at three weeks of age, invented the hamburger, controlled the weather, and got eleven holes-in-one playing his first game of golf. Most impressively, he never, ever urinated or defecated. Seriously – no shit!

Just a few days from now, North Korea will launch a rocket that they say is intended to put their first space satellite into orbit around Earth. However, international observers insist that North Korea is actually conducting a long-range ballistic missile test to determine whether they can nuke the USA. That would violate several United Nations Security Council resolutions – and probably trigger a major geopolitical crisis. North Korea made a similar attempt back in April, but the rocket crashed and burned. Here's hoping that this time, their scientists prove themselves just as adept at rocket science as they are at archaeology.

* The People's Daily has since removed the "Sexiest Man Alive" story from their website. However, somewhat inexplicably, Kim Jong-un leads TIME magazine's online poll for Person of the Year 2012 by an extremely wide margin. As of this writing, he has 2,124,767 "yes" votes: which is 1,763,677 more than the number two contender.
Posted by Mat Thomas at 12:45 PM 14 comments:

My "Rebranding Veganism" Article is Online


My article "Rebranding Veganism," which appeared in the June 2012 issue of VegNews magazine, is now available online for your reading pleasure. This four-page feature profiles six cutting-edge companies using modern marketing to help vegan businesses succeed and gain maximum exposure. Read all about: 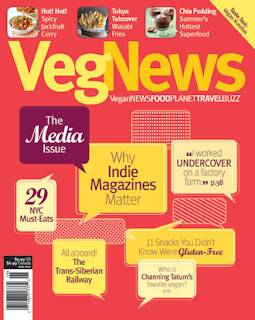 My Business "Self-Portrait" in VStream E-Zine 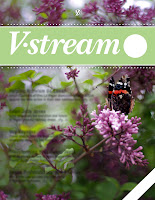 My one-page business "self-portrait" is in the brand-new Spring/Summer 2012 issue of VStream, Vegan Mainstream's e-zine. This 69-page online magazine is chock full of articles, recipes and more to feed both your mind and your appetite.

My profile focuses on the intersection of personal and professional passions – in this case, writing and kindness to animals. It also explores the experiential similarities between starting a business and going vegan, and how each of them changed me.

- Read my profile to get a taste for what's in the e-zine, then

My new feature article in the latest issue of VegNews magazine

My new feature article appears in the latest issue of VegNews magazine, which is on newsstands now. Entitled “Rebranding Veganism,” it profiles six cutting-edge companies using modern marketing to help vegan businesses succeed and gain maximum exposure. Read all about: 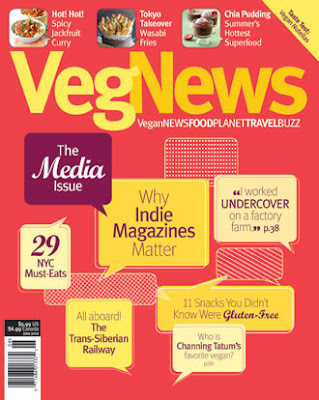 If you’re not yet a VegNews subscriber, get a copy now by:

- picking one up wherever fine vegan lifestyle publications are sold

No, the Oompa Loompas didn’t sing those lyrics after any of the snotty, bratty little Golden Ticket winners got their just desserts on their tour of Willy Wonka’s famous fictional chocolate factory. But the melodically/morally-inclined OLs might change their tune if they worked for Clif Bar and Company, which refuses to tell their customers what country the cocoa for their chocolate comes from. This information is important because 75% of the world’s cocoa is supplied by two West African countries, Ghana and the Ivory Coast — where the use of child labor, and even child slavery, is widespread on cocoa plantations.

Now, by child slavery, I mean actual slavery: children from 12 to 16 years old (and some as young as 7) sold by their parents to cocoa growers, never seeing their families again, held against their will and forced to work on cocoa plantations. I mean overseers savagely beating and whipping kids who don’t work fast enough or get caught trying to escape. By child labor, I mean children deprived of education (in violation of International Labor Organization laws) using sharp, heavy machetes to cut cocoa pods from treetops. I mean kids being sprayed with toxic agricultural chemicals sans protective gear. Learn more here.

Over the past year, the Food Empowerment Project (FEP) has asked dozens of companies to disclose what countries they get their cocoa from to determine whether they subsidize child slavery. FEP doesn’t ask these companies to reveal any sensitive information that could potentially jeopardize their market share (like details about their supply chain or growers’ names). They just want to know what country they get their raw cocoa from. But rather than answer this very simple question, Clif Bar is pulling a Wonka. They say they must keep this information secret to protect their business against espionage by the protein bar industry’s equivalent of Slugworth Chocolates, Inc.

When I emailed Clif Bar about my concerns and asked why they refused to grant FEP’s simple request, a guy named Bobby responded. He seems like a perfectly nice fellow whose job entails placating pesky pain-in-the-ass meddlers like myself with soothing platitudes that tow the company line. I say this because he absolutely refused, after multiple emails, to answer a very simple, straightforward, crystal-clear question: what country does Clif Bar’s cocoa come from? Corresponding with him was like listening to a skipping CD.

That is, no matter how earnestly I expressed my concerns, he just kept evasively stating that his employer “is committed to socially responsible sourcing practices,” “creating a sustainable supply chain,” and sourcing 100% of their cocoa from Rainforest Alliance Certified (RAC) farms by 2013. It quickly became painfully obvious that he was just pasting in a standard company-approved response over and over, no matter what I wrote. Poor guy: he must've been hearing from a lot of other disgruntled customers besides me recently.

But on the surface at least, Clif Bar's explanation sounds reasonable, right? Well, not according to FEP: they claim that RAC’s human rights standards are very weak, and that it’s the very same certification Hershey plans to begin using soon for their ironically-branded “Bliss” chocolate line.

I expect dissembling and denials from chocolate industry giants like Hershey, Nestlé and Mars, who clearly don’t give a crap that their products support child slavery, and only care about getting the cheapest possible ingredients so they can make the most profit. But I naïvely thought Clif Bar was different. It’s one of those rare companies I felt a personal connection with because: 1) I’ve been buying and enjoying their products for years, especially the chocolate peanut butter Builder’s Bar, and 2) I was inspired by founder Greg Erickson’s personal story and self-proclaimed commitment to socially responsible business practices.

But now, with Clif Bar disingenuously refusing to disclose what country they get their cocoa from, I can’t help but feel that Mr. Erickson and company have thrown their own values under the bus. I mean, making specious excuses that insult their customers' intelligence and trying to hide their horrific business practices from us is not cool. To say Clif Bar has personally disappointed me is an understatement: I feel betrayed.


So I call shenanigans on Clif Bar. I don’t buy their “proprietary” explanation, and won’t buy their products anymore because I strongly suspect they are tied to child slavery. Just because a food is vegan doesn’t mean it's humane: the way it’s made may still harm others and violate our ethics. And you don’t need to be vegan to know that child slavery is wrong: you just need a heart. That’s why we must hold Clif Bar accountable to our principles — and their own.

- Use FEP’s Action Alert to let Clif Bar know that actively opposing child slavery is more important to you than any food will ever be, and that you won’t buy their products until they disclose what country their cocoa comes from


- See FEP’s Chocolate List for companies that source their cocoa ethically and therefore deserve your business
Posted by Mat Thomas at 1:47 PM 8 comments: 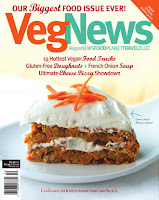 Last month I wrote in this blog about my four-page article on how to open a vegan restaurant being in the latest issue of VegNews. Well, now that the magazine's November/December issue is out, I've posted the article as a .pdf on my Web site. If you never got around to reading "Restaurant: (Im)Possible" in print form, now's your chance to read it online.
Posted by Mat Thomas at 1:36 PM 8 comments: