On Humankind's Monstrous Cruelty to Animals


Warning: The following contains blood-curdling accounts of terror that may not be suitable for the faint of heart. Read on — if you dare!
Every Halloween, millions of people celebrate by dressing up in costumes, trick-or-treating for candy, adorning their homes with festive decorations, and partying their hearts out. While this is all well and good, we must not forget that while we enjoy ourselves during this frightfully fun holiday, billions of animals are actually living out our worst fears in slaughterhouses, vivisection labs, and other hellish houses of horror. As the scariest night of the year, Halloween is an especially fitting time to cultivate compassion for those who endure such unremitting torture.
Start by trying to imagine, if only for a moment, the torment of a single animal in a slaughterhouse. Visualize yourself being herded down a metal chute towards a man in a red- 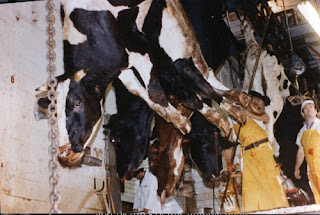 spattered apron. He puts a retractable bolt gun to your head and pulls the trigger right between your eyes, but the blast doesn't damage the right part of your brain, so you remain conscious as you are shackled by the ankle and hoisted upside-down, then pulled along on a ceiling-mounted conveyer track. As you move down the line, looming ahead you see the sticker: a slaughterhouse worker wielding a large knife. Even though you are still alive and kicking, he slits your throat anyway, blood spurting and pooling on the floor. You flail wildly in pain, but another worker down the line nonetheless proceeds to chop off your hands and feet with a giant hydraulic clipper until finally you are beheaded, your body left in pieces for people to eat.
Sounds like a scene from a scary movie, right? Yet that is just one example of many, as billions of animals all over the world are killed in similarly horrific ways in fur farms and other dungeons of industry, the wild, and the privacy of people's homes. For instance, there are demented sexual deviants who make animal snuff films and post them on the Internet as an unusually perverted form of pornography. Yet it's obvious that animal abuse is not confined to a few random sickos breaking the law in their bedrooms: it's deeply embedded in our culture and society, which systematically normalize torture and terror by packaging and marketing the products of death.
People eat animals' bodies and wear clothing made from their skins every day. From the animals' point of view, this is utterly horrifying. What if someone decided to eat us, wear our skin and hair, or experiment on us? Such questions get right to the heart of what most terrifies us, and our disconnection, as one species among millions, from the unmitigated misery our actions cause others to suffer.
Monster Mash
Judging from recurrent themes in horror movies and books, it is clear that what we do to animals is a reflection of our most primal fears as humans. For instance, the psychotic mass-murderer in The Texas Chainsaw Massacre, aptly named Leatherface, is a cannibal who treats his human victims like cattle in a slaughterhouse, hanging them from meathooks before chopping off their limbs. Such brutality has its real life parallels in the crimes of notorious serial killers such as Jeffrey Dahmer, who is known to have tortured animals to death before he started killing and eating human beings.
Some of the most ghastly monsters are unholy cross-species abominations from the laboratories of mad scientists. In H.G. Wells' prescient 1896 novel The Island of Dr. Moreau, an idealistic but power-mad vivisector sews together human-animal hybrids who turn out to be vicious killers. In recent years, scientists have actually begun to create transmutated chimeras who are genetically part animal and part human. Such "progress" could signal the birth of Moreau's monsters at this moment in history.
These experimental lifeforms are primarily used as research subjects and to harvest organs for human transplants, so their creators try to make them as humanlike as possible to close the species gap that has always plagued animal research. While such organisms don't usually survive for very long because they are biologically flawed, contemplating what they experience while alive can make your spine tingle. Researchers have already bioengineered mice with part-human brains, and it is not outside the realm of possibility that these modified rodents might inherit from us some degree of self-awareness, and perhaps eventually even a hideous knowledge of what they are.
Such thoughts bring to mind another perennial horror classic, Frankenstein. In the 1818 novel by Mary Wollstonecraft Shelly and many subsequent film adaptations, Dr. Victor Frankenstein creates a man from parts of human and animal cadavers. "The dissecting room and the slaughterhouse furnished many of my materials," he says of his experiments. Of course, after bringing him to life with a lightning bolt, the horrified scientist rejects his creation, who thus becomes bitter and homicidal and gradually murders Victor's loved ones. A fictional warning from the dawn of the Industrial Revolution, Frankenstein's "monster" serves as a dire prediction of the untold horrors that science and technology may yet unleash upon the world.
The Hunter Becomes the Haunted
Other works in the horror genre explore the "animal" nature that lurks deep within the human soul. Many of these stories have their origins in ancient tales that have been told for centuries, with variations occurring in different parts of the world. A werewolf, for instance, is a bloodthirsty beast that transforms from a human into a wolf during the full moon and preys on people. Vampires (who can change into bats) use their sharp fangs to feast on their host's blood, turning them into vampires as well. Legend has it that some witches are able to transform themselves into black cats to roam the night undetected. These supernatural shapeshifters out of folklore have not only terrorized our imaginations down the ages, but also raise serious questions about human nature: that is, whether our tendency towards violence is innate or symptomatic of our alienation from nature and ourselves.

Such primeval mythological figures may also symbolize our fear that animals will someday take revenge for the horrors we inflict on them, as movies like Alfred Hitchcock's The Birds and Stephen King's Pet Cemetery suggest. Most people remain in willful denial of the bloody killing rituals that occur every day behind closed doors, so the fear that animals will somehow return to give us a taste of our own lethal medicine is largely subconscious. Yet it is brought more directly to the surface by another increasingly popular monster: the flesh-eating zombie.
George Romero invented the zombie movie subgenre in the late 1960s with his groundbreaking film Night of the Living Dead, an allegorical tale of the undead that remains almost 40 years later a scathing social critique of violence and racism. Since then, hundreds of other films have explored the theme of cannibalism from beyond the grave, reminding us that our bodies are made of meat, too, and that there may be those out there who want to eat us alive. This metaphor for meat eating opens the potential for people to identify more closely with the non-human victims of our carnivorous consumer culture, as is the intention of Internet cartoon character Tofu the Vegan Zombie.
Alone in the Dark
When the nighttime comes creeping in, you may recall that as a child you often hid beneath the covers in frozen terror from the monsters in your closet, under your bed, and in your head. If we remember what it was like to be that scared, we can understand some of what animals feel, and that the most frightening "monsters" aren't just lurking in our nightmares: they exist in the real world. They are on slaughterhouse disassembly lines, in high-security buildings on college campuses wearing white lab coats, and on the sales floors of fur salons selling the very skins off of animals' backs.
If by chance the tens of billions of animals being killed every year are able to understand who is responsible for their enslavement, then human beings must seem like rapacious monsters who show little mercy for their victims and no remorse for their devilish deeds. Mechanized assembly line production methods have made the scale of death so massive and so brutally surreal that it is difficult to comprehend, much less communicate to others. But we must continue to try, for the sake of the animals, by taking advantage of the special possibilities for positive and effective outreach that Halloween offers.

Have a scary good time!

It's simple to give people a taste of the vegan lifestyle during Halloween without frightening them away. Try these easy ways of making compassion an integral part of your holiday celebration:
- First, be sure to keep plenty of vegan candy handy for those cute little trick-or-treaters who show up at your door.
- If you're dressing up, go as your favorite animal. Your costume could be something scary like a tiger or cute like a kitten, but make sure it isn't made with leather, wool, fur, or feathers. If you think your canine friend would like get in on the fun too, make or buy a Halloween costume for your dog. Just be sure they're comfortable with what they're wearing, and that costumes don't interfere with their normal motions.
- Host a vegan Halloween party for your friends and serve a scrumptious spread that didn't cost any animals their lives. Try some ghoulish recipes for healthy holiday fare such as Devilish Dip, Vampire's Blood, and the Warlock's Special. You can also cook seasonal favorites like Harvest-stuffed Acorn Squash and Pumpkin Pie with Pecans to go along with them.
Show some real horror films!

If you have friends who are horror buffs, Halloween is the perfect time to expose them to the horrors of factory farming, vivisection, and other terrifying realities by inviting them to watch an animal rights video with you. Your average meat eater might turn their eyes away in disgust from graphic documentaries like Earthlings and The Animals Film, but horror aficionados who appreciate spooky cinema may be receptive to the method and message of such movies. Films are a gateway for many to greater empathy for animals and humane lifestyle changes, but only if people actually see them, so order your DVDs today to have them in time for Halloween!

Reach the People!
Towns throughout the western world host Halloween festivals and parades, which in the largest cities are attended by thousands of people. These make great places to leaflet, especially dressed as your favorite animal, and being in the Halloween spirit might make people more open to the information you have to offer. To get started, order or print copies of IDA's new flyer on meat eating and the environment to hand out.
Posted by Mat Thomas at 1:15 PM No comments: