Animal advocates around the U.S. were stunned and dismayed on Monday, November 13th when Congress quickly approved the Animal Enterprise Terrorism Act (AETA), a bill that threatens to seriously curtail Americans' basic civil liberties. President Bush is expected to sign the bill, which was sponsored by Republican Congressman Tom Petri. With the bill's passage, many fear that mainstream activists could be arrested and charged as "terrorists," even though Americans' right to legitimate protest is explicitly protected by the First Amendment to the Constitution.

Claiming that the AETA is only a threat to violent animal rights "extremists" who damage property and threaten people's safety, Petri and his supporters point to language in the law that supposedly exempts legal forms of protest from prosecution. Unfortunately, this 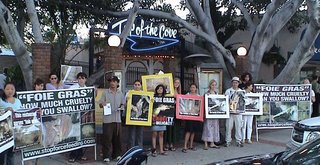 statement does not cover many important forms of activism, including undercover investigations, whistle-blowing and many forms of non-violent civil disobedience. Those who use these tactics could now be labeled "terrorists" and sent to prison, not for physically harming anyone or damaging property but for causing a business to lose money.

In fact, the law is so broadly written that even activists who organize boycotts and leaflet outside of stores could conceivably be charged under the AETA with economically damaging animal enterprises. These are defined as any business involving animals (factory farms, fur farms, vivisection labs, rodeos, circuses, etc.), and includes manufacturers, distributors, and sellers of animals or animal products. The AETA even applies to third-parties that do business with animal enterprises, such as law firms, insurance companies and investment houses.

The AETA is unprecedented in providing specific penalties based not on the "crime" committed, but rather on who it was committed against: namely animal enterprises. No other industrial sector in U.S. history has ever been given such exclusive legal protections against public criticism. Vegan Congressman Dennis Kucinich (D-Ohio), the only Representative to vote against the AETA, stated his opposition to "creating a special class of violations for a specific type of protest." This means that the AETA provides specific punishments for people based on their values -- namely their belief in animal rights.

Congressman Kucinich's objections fell on deaf ears. In fact, he was one of only six Representatives present in the House chamber to vote on the AETA. Few Representatives were even in town on this first day back after a month-long recess. In this "lame duck" session of Congress, the bill was debated for a mere fifteen minutes before being passed. Representatives took a voice vote on the matter, a procedure usually reserved for non-controversial legislation that doesn't require extensive review or discussion, meaning that the vote wasn't even recorded.

Though animal advocates called and wrote their leaders warning them about the AETA's dire consequences, Congress allowed a law to pass that makes terrorists of people exercising their Constitutional rights. In so doing, they failed and betrayed us and the animals we seek to help. It's difficult to understand or accept that our leaders could be so oblivious to the AETA's dangers when our very freedom is at stake.

While corporate interests have clearly won out over democracy, this is but one battle in the ongoing struggle to achieve justice for animals. The moral vision of our country was founded upon the inalienable right to protest injustice, and the animal rights movement is part of this great tradition. Animal advocates must continue to unite, with determination and resourcefulness, to defend our rights against the tyranny of corporate control, even as we face an uncertain future.

As one of the more than 160 members of the Equal Justice Alliance, a national coalition of social advocacy organizations preserving free speech and equal treatment under the law, IDA is committed to doing all we can to safeguard our right to speak and act lawfully against cruelty to animals. No one is sure yet how this new law will be applied -- whether it will be used to silence legitimate activities, and if so which ones. We will update our members on the AETA's implications and let you know how what actions you can take in future alerts.
Posted by Mat Thomas at 9:30 PM 1 comment: