An interview with founder & Executive Director of Mercy For Animals, Nathan Runkle
As I wrote in my first post of this series, three state legislatures (Iowa, Florida and Minnesota*) have introduced bills to criminalize taking photos and videos of animals being mistreated on factory farms—while doing absolutely nothing to stop the widespread animal abuse that these undercover investigators document. Today's installment: my interview with founder and Executive Director of Mercy For Animals (MFA), Nathan Runkle.
Runkle grew up on a farm in rural Ohio, and founded MFA there as a high school student in 1999 in response to a local pig farm cruelty case he got involved in. He has led teams of undercover MFA investigators in exposing animal cruelty at factory farms and other agriculture operations, including the state's four largest egg producers. In the course of his investigative work, Runkle has also rescued and helped rehabilitate dozens of abused and neglected farm animals. In addition, he coordinates MFA's outreach, advocacy and media campaigns, and is a nationally-recognized speaker on farm animal advocacy who has given hundreds of interviews to major newspapers, radio shows and television programs.
Anyway, here's Runkle's take on the proposed bans of undercover factory farming investigations:
AR: Why do you think agribusiness and some politicians are pushing so hard to pass these bills?
NR: Because undercover investigations have been so effective at exposing the inhumane treatment of animals inside factory farms and slaughterhouses. They have led to civil and criminal animal cruelty convictions against employees and companies, major corporate policy changes, and passage of landmark legislation banning veal and gestation crates, battery cages, and some forms of painful mutilation. They've also elevated the level of awareness and discussion among consumers about the plight of farm animals.
Agribusiness knows that their practices are out of step with most American's values, so they're desperately scrambling to conceal factory farming cruelties from public view with these bills. Obviously, rather than blinding consumers to what they're doing, it would make a lot more sense for the industry to be proactive about improving conditions for animals. Instead, they're resorting to censorship because it's essentially cheaper and easier than improving animal welfare.
One of the most common claims made in defense of these bills is that investigators “selectively edit” them to make it seem like there's more cruelty going on than there actually is. Some people even accuse investigators of “staging” the acts of animal cruelty they capture on video. Personally, I don’t see how that’s possible, especially given that the footage basically depicts other employees abusing animals.
We get many hours of footage from each investigation, which we then have to edit down to hold viewers' attention. People are used to watching short YouTube videos that are a few minutes long, and that's generally the amount of time we have to present the evidence. Plus the footage is so shocking and painful to watch that most people can only take it in small doses.
Whether it's raw footage or the YouTube version, however, our undercover videos accurately depict what actually happens to animals on factory farms—and law enforcement officials can testify to that. That is, whenever we document what we believe are violations of animal cruelty laws during our investigations, we hand over all of our unedited footage to law enforcement, who then review it for applicable violations. We have a history of successfully criminally and civilly charging companies and individuals for animal cruelty based on our undercover videos. So, if the footage is so strong that law enforcement is willing to take action, and it's used as evidence in a court of law to convict factory farmers of animal cruelty, then of course our videos are true-to-life representations of the abuse being perpetrated in these facilities.
So why then do some people insist that investigators manipulate video footage for their own ends?
I think they're habitual liars who know that the public will not, under any circumstances, find animal abuse acceptable. They therefore have to claim that we've staged acts of animal cruelty. What it boils down to is that we've caught them red-handed—literally, with blood on their hands—and they cannot defend what's going on, so they're trying to shoot the messenger. What they really need to do is look at these investigations, admit that they have real problems, and address the endemic cruelty taking place in their facilities. Instead, the industry is showing how little regard they have for animal welfare and public opinion, and that they are willing to tell outrageous lies to maintain the status quo and their profit margin.


Tune in again on Thursday, April 28 Friday, May 13
for my interview with Jeff Kerr,
General Counsel for People for the Ethical Treatment of Animals (PETA)
* The Minnesota and Florida bills have been defeated since I posted this interview. However, New York legislators proposed an Ag Gag bill afterwards.
Posted by Mat Thomas at 10:51 AM 4 comments:

- Watch COK's undercover factory farm investigation videos.
- Iowa Residents: Use this convenient HSUS Action Alert to encourage your state senator to oppose S.F. 431. Also contact your state senator directly, and ask him or her to oppose this bill.
Tune in again on Monday, April 25 for my interview with Nathan Runkle,
founder and Executive Director of Mercy for Animals (MFA)
* The Minnesota and Florida bills have been defeated since I posted this interview. However, New York legislators proposed an Ag Gag bill afterwards.
Posted by Mat Thomas at 9:46 AM 10 comments:

- Watch HSUS's undercover factory farm investigation videos.
- Iowa Residents: Use this convenient HSUS Action Alert to encourage your state senator to oppose S.F. 431. Also contact your state senator directly, and ask him or her to oppose this bill.
* The Florida and Minnesota bills have both been defeated since I posted this interview. However, New York legislators proposed an Ag Gag bill afterwards. 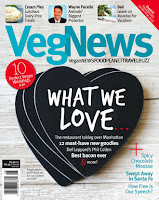 From beef and eggs to peanuts and greens, there's been a measurable increase in food recalls recently. Some of the biggest food recalls in U.S. history have occurred in the last several years, and more food products were recalled in 2010 than in any previous year. So, does this rise in recalls mean our food is becoming more hazardous to our health, or that the U.S.'s food safety system is getting better at identifying and neutralizing threats?

I attempt to answer this and other burning questions about food-borne diseases in my new six-page feature "Fear Factor" in the May/June issue of VegNews magazine. About 1 in 6 (or 48 million) Americans will get ill and 3,000 will die from eating tainted food this year. Don't become just another statistic — protect yourself by getting the facts about food recalls in my latest article!