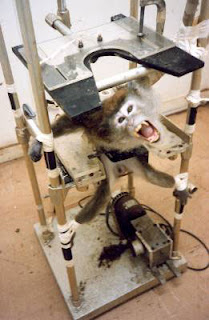 What we learn from torturing and killing animals in medical “research” and “scientific” experiments tells us little or nothing about healing people, but it reveals much about the human species’ arrested evolutionary development. Real progress would be marked by the abolition of animal experimentation, and the introduction of compassion as the guiding principle in our search for truth.
Posted by Mat Thomas at 6:01 PM No comments: