The Singularity: Building the Perfect Beast?

“You will be assimilated. Resistance is futile.”
– The Borg, from Star Trek: The Next Generation

Some scientists believe that, within the next three decades, humanity will reach an evolutionary turning point called the Singularity when we mind-meld with machines to create a living, conscious intelligence that is superior to our own. Such a history-shattering event would essentially usher a new and unprecedented species into existence—a race of TransHumans who would be ultra-intelligent, virtually immortal and perhaps physically unrecognizable.

Though it’s still much more science fiction than actual fact, some researchers (and billionaire investors) believe the Singularity is not only possible but inevitable. Technocrats speculate that the convergence of exponential aggregate advances in genetics, artificial intelligence, robotics, nanotechnology, cybernetics, cloning, and other inconceivably-complex disciplines will someday allow people to synthetically enhance their minds, bodies and lifespans beyond the narrow limits that nature has otherwise imposed upon us mere mortals. Among the more mundane proposals: surgically implanting fully-integrated microprocessors in humans’ brains, growing vital organs in test tubes, designing smart swarms of nanobot doctors that can routinely cure life-threatening diseases, and downloading people’s memories and personalities onto hard drives so they can “live” forever on the digital plane.

While it seems that Singularity scientists’ supreme goal is to turn humans into real-life superheroes (or perhaps demigods), they certainly don’t confine their theoretical “improvements” to us Homo sapiens. They claim that tomorrow’s pets, for instance, will also be custom-made in the lab—from parts of different animals, that is, and perhaps spliced with human DNA. The hybrid chimeras of mythology (from mermaids to unicorns) could then be made flesh-and-blood, along with freaky Frankenpets like furry fish, flying cats and talking dogs. 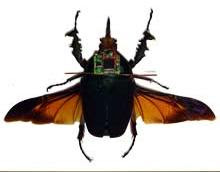 And then there are the cyborg species: animals with bionic bodies and computerized brains designed for military security and surveillance detail. The Army has already fitted insects with electrodes connected to tiny circuit boards and radio receivers that allow human operators to remote-control their flight patterns. As for the Singularity’s impact on farm animals, factory farms are already overpopulated with mutants who’ve been genetically selected for commercially exploitable characteristics like rapid growth and oversized body parts. However, the Singularity could enable bioengineers to manufacture livestock that are even more “adapted” to the artificial assembly line environment, like hydraulic hens, pigs with toes for standing on concrete floors, and cows with stretchy silicone udders.

On the plus side perhaps, Singularity technology may also be the key to mass-producing meat in vitro and with food replicators, which could conceivably end factory farming (and the suffering it causes). Yet, for all their forward-thinking, Singularity scientists appear to have no more ethical concern for animals than their more traditional colleagues—even though the realization of their ideas could visit new and even greater forms of pain on other species by changing their very nature. Indeed, they could construct self-aware creatures who, lacking legal rights, are just as exploited as today’s animals.

On that dire note, here’s hoping humanity’s techno-transcendence is accompanied by an ethical Singularity of planetary mass consciousness-awakening. Because ultimately, without greater understanding of and respect for life itself, our evolutionary leap forward will merely lead us from the proverbial frying pan into the fire.

- My 8-page illustrated VegNews article about the future of vegetarianism