Spain has recently been pondering a very forward-thinking and intriguing possibility: granting great apes legal rights of personhood to protect them from exploitation and abuse.

Francisco Garrido, a bioethicist and Green MP representing Seville, recently introduced a resolution in the Spanish parliament's environment committee to extend the basic rights of life, freedom and protection from torture to chimpanzees, orangutans, bonobos and gorillas. The committee is expected to pass the resolution, as it enjoys widespread support among both the public and many government officials, and Garrido is hopeful that a full-fledged Great Apes Law will be introduced following the summer recess. If that is approved, Spain will become the first country in the world to grant rights to non-human species.

This could have many beneficial implications not only for great apes in Spain but also around the world. A Great Ape Law would redefine the legal status and standing of certain simian species by eradicating human or institutional "ownership" of apes. They would instead be placed under the "moral guardianship" of the state, preventing their exploitation for profit. With passage of the new law, most apes now in Spanish zoos and circuses would henceforth live in state-sponsored sanctuaries. In addition, harming or mistreating a great ape would be punishable as a criminal offense (barring cases of self-defense and euthanasia). The use of great apes in medical research would also come to an end in Spain, as it has in Britain and New Zealand.

A Great Ape Law would also have global repercussions. For instance, it would impel the state to use its voting power in international forums and organizations to promote the welfare of captive great apes in other countries and help avert the extinction of wild apes. In addition, a Spanish law protecting rights for animals would raise the bar for other European countries, making it likely that they would pass similar legislation. Finally, it would set an important precedent that could be applied to the protection of other cognitively complex species, especially elephants, whales and dolphins. 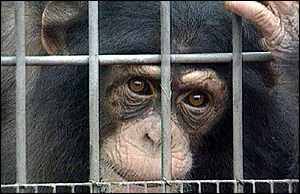 While the resolution is considered controversial, most who oppose it do so because they believe that every right is by definition a "human" right, so of all the millions of species living on planet Earth, only humans can have rights. From this narrow perspective, granting animals even the most basic right of freedom from abuse would be an affront to our laws and traditions while challenging to the very core the self-centered idea that we have the right to use other species for our supposed benefit regardless of their interests. From the animals' perspective, the fact that human civilization continues to deny these basic rights to all animals in order to keep them powerless and enslaved is the height of speciesist arrogance. Nonetheless, Spain's environment minister Cristina Narbona has already addressed critics' concerns by clarifying the law's intent. "We are not talking about granting human rights to great apes," she stated, "(but about) protecting (their) habitat, avoiding their ill-treatment and their use in various circus activities."

The declaration as it stands was inspired by and based on concepts advanced by the Great Ape Project (GAP), "an international group founded to work for the global removal of non-human great apes from the category of mere property, and for their immediate protection through the implementation of basic legal principles designed to provide these amazing creatures with the right to life, the freedom of liberty and protection from torture." In seeking to secure rights for non-human primates, GAP scientists point to solid scientific evidence of the remarkable biological, psychological and social congruities between great apes and human beings. For example, over 99% of our DNA is identical to that of great apes, and they display thinking, emotions and even moral qualities very similar to our own. There is also wealth of scientific data indicating that great apes and other species are sentient and self-aware.

In 1993, GAP published the first edition a book edited by eminent philosophers Peter Singer and Paola Cavalieri called "The Great Ape Project: Equality Beyond Humanity" in which scientists and legal experts cogently argue that great apes are worthy of protective rights. Learn more and order a copy of the book.
Posted by Mat Thomas at 9:28 PM 2 comments: