For over a year now, I've been working as a writer/editor for Farm Sanctuary, North America's first and still largest rescue and shelter organization for “food” animals. In fact, about two weeks ago, I relocated from San Francisco to New York so I could be present at the organization's headquarters in Watkins Glen and get personally acquainted with some of the hundreds of rescued farm animals who reside there. Though I don't actually have a place to live yet and I'm currently lodging with my folks on Long Island, I'm hoping that this enhanced proximity will add new layers of depth to my writing — and perhaps make me a better person, too.*

I chose to make my move in April not only for weather-related reasons, but also because springtime marks the beginning of Farm Sanctuary's annual tour season. Every year from May to October, thousands of people from around the globe visit the non-profit's shelters in upstate New York and northern California to meet & greet rescued farm animals face-to-face. It's not hype or hyperbole to say that these lucky cows, pigs, sheep, goats, chickens, ducks, geese, turkeys, and rabbits live in a pastoral paradise that may be about as close to Utopia as farm animals can get on this mortal coil. 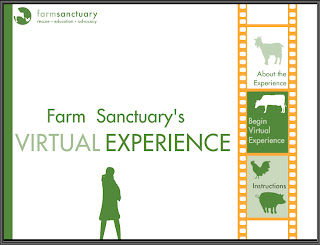 organization's shelters (as well as different kinds of factory farms and slaughterhouses) online anytime. In this synthesized electronic environment, you'll find photos and videos of some of the animals who live at Farm Sanctuary, along with text (written by Yours Truly) that conveys heartwarming rescue stories, details about animals' individual personalities, and fascinating facts concerning each species' unique habits and abilities. You'll also see vividly-rendered versions of the barns, pastures and ponds that comprise Farm Sanctuary's gorgeous grounds. 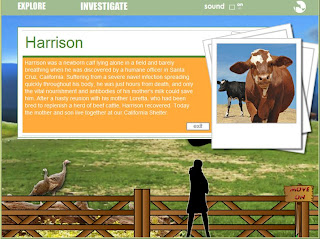 e in Adobe Flash, an exceptionally versatile software suite that enables programmers to integrate interactive animation with embedded audiovisual elements for enhanced realism. Others who contributed to the project include Farm Sanctuary Video Coordinator Erin Howard, who gathered all of the photos and video, and Communications Manager Natalie Bowman, who edited and guided the whole enterprise to fruition. With an enthusiastic avatar always ready at the click of a mouse to snap photos of animals on 14 distinct levels representing different sections of Farm Sanctuary's shelters, the Virtual Experience is a place where you can go to learn, explore...and just have fun! Be sure to encourage your friends to pay the animals a visit as well!

The fortunate few rescued animals living at Farm Sanctuary account for only an infinitesimal fraction of the tens of billions who are callously killed for food each year around the globe. As such, these individuals act as ambassadors whose gentleness and affection awakens compassion, transforms consciousness, and inspires people to make more humane die 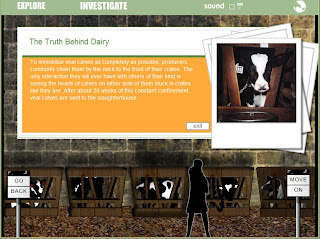 tary choices. While you'll meet these beloved animals on the first leg of the Virtual Experience, those inhabiting the second are condemned to lifelong torture and pain that ends in violent death well before their natural time.

The factory farm section of the Virtual Experience exposes the disturbingly harsh reality that animals raised for beef, pork, poultry, dairy, veal, and foie gras are subjected to for their entire lives. Here you become an intrepid investigator witnessing the routine cruelty perpetrated behind a curtain of deception, and see actual photos and videos from more than two decades of Farm Sanctuary investigations documenting standardized animal abuse in the agribusiness industry. Incidentally, I wrote the text for this part of the Virtual Experience as well, so I hope you'll find it informative and engaging.

Between Heaven and Hell

It's normal to be revolted by the horrors taking place every day in stockyards, factory farms and slaughterhouses: if seeing these atrocities makes you feel frightened, anxious or outraged, then rest assured that you have a healthy conscience which identifies with others who are suffering, and recognizes how wrong it is to inflict pain and death on innocents. It is this empathic impetus that drives all of us at Farm Sanctuary to imagine a future (perhaps many generations hence) when humanity stops murdering members of other species to please our palates. A visit to one of Farm Sanctuary's facilities, or a spin around the shelter segment of the Virtual Experience, can provide an enlightening glimpse of what such a world might be like.

Yet, if animal advocates are to have any hope of realizing the vision of peace and harmony that burns within our hearts, we must look both to the candle flame that Farm Sanctuary and others have tended as a beacon of illumination and also at the repugnant abominations that most people instinctively turn away from in disgust. Directly facing our fears empowers us to overcome them, and in the case of farm animals, billions upon billions of lives literally depend on our courage to take action. The Virtual Experience adds another side to Farm Sanctuary's already multifaceted efforts to end the exploitation of intelligent, emotionally-complex living beings, and will greatly increase the number of people who are able to “visit” and befriend the amazing animals who call their shelters home.


* Farm Sanctuary laid me off from this job in October 2009, and I moved back to San Francisco in January 2010: whether this cross-cross-country move has made me a better person or not is still a matter of some debate within my own mind.
Posted by Mat Thomas at 7:49 AM 1 comment:

More than five months after being elected President of the United States, Barack Obama has finally delivered on one of his most highly-publicized campaign promises: to get a dog for daughters Sasha and Malia.

Bo is an adorable six-month-old Portuguese water dog with both a purebred bloodline and a dynastic pedigree: that is, his original guardian was Senator Ted Kennedy, whose professional animal trainers had provided etiquette lessons “at a secret, undisclosed location outside Washington.” All this canine charm schooling paid off when Bo met the Obama girls at the executive mansion, where he reportedly followed them around, didn’t chew on any furniture, and avoided any potty faux pas.

The announcement has already rankled animal rescue advocates who wanted the Obamas to choose a mixed-breed dog from a shelter, maintaining that this would have set a positive example for the nation and the world that would ultimately save millions of homeless animals’ lives. President Obama had expressed interest in adopting a mutt last year, and an Associated Press poll conducted in January showed that more than two-thirds of Americans wanted the First Dog to be a mutt. However, in the end the Obamas decided to go with a porty because 10-year-old Malia is allergic to dogs, and this particular breed has been genetically selected to be hypoallergenic.

Purebred puppy proponents, on the other hand, maintain that the choice of a porty reflects the Obama family’s needs, and that they should be commended for doing the research necessary to ensuring their daughter’s health. “It's long past time to stop apologizing for owning purebred dogs,” wrote a dog trainer called Gaelen on her blog, Life Out Loud! “Dog ownership advocates, let's help the Obamas by supporting their choice. Let's put animal rights activists – who do little for the welfare of domesticated animals, and are primarily focused on their own anti-pet-owning agendas* – on notice: owning purebred dogs is a choice of which the Obamas, and everyone else who owns a purbred (sic) dog, can be proud.”

Symbolism and squabbling aside, here’s hoping the First Family is happy with their newest four-legged member. Neither Barack nor Michelle Obama have ever had dogs, and this will be Sasha and Malia’s first companion animal, so the experience may well open them all to a new way of relating to non-human species. Now that the doggy decision has been made, perhaps the nation will move on to weightier matters…although Bo is so cute, he may wind up stealing some of the President’s spotlight for many years to come!

* Click on the "Comments" below to read my response to this false accusation.
Posted by Mat Thomas at 11:58 AM 2 comments: