California: Get the Vote Out for Farm Animals

There is an article in yesterday's San Francisco Chronicle which states that less than 25% of likely California voters are even aware that Proposition 2 -- the Prevention of Farm Animal Cruelty Act -- will be on the ballot in November. That's apparently typical for voter awareness of ballot initiatives, with the election still more than three months away. However, there are already a dozen propositions on the ballot (and counting), making state initiatives very confusing for voters who (experienced poll workers say) too often don't understand what they're voting for or against.

In this case, I think that the more time people have to consider our issue by learning what actually happens to animals on factory farms, the more likely they will be to support Prop. 2 on 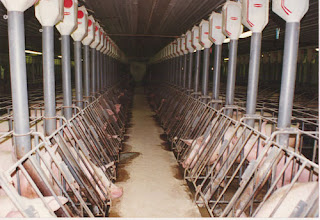 November 4th. It is noteworthy that another new study shows that of those polled, voters favor Prop. 2 by a whopping 63% to 24% -- an impressive margin of more than two-to-one. Nonetheless, leaving 75% of voters to enter the booth without the facts needed to make an informed choice could lead to defeat, so we animal advocates should take this as a sign and an opportunity to make sure we get the word out. Doing so is made only more urgent by the fact that the opposition is already on the move.

They call themselves Californians for Healthy Food, a group that is comprised of the state's most powerful agribusiness conglomerates. They have already poured a massive infusion of cash into disseminating a shameless misinformation campaign specifically aimed at fooling the public into protecting the industry's profits instead of animals' lives. According to the Chron article:

poultry and egg companies have put hundreds of thousands of dollars into a campaign war chest to fight Prop. 2, which they say would devastate their industry and boost the price of eggs.

"Our job is to communicate with the voters and tell them what the consequences of this initiative really are," said Julie Buckner, a spokeswoman for anti-Prop. 2 efforts.

One fact the Chron reporter failed to mention in this context is that research shows it costs producers less than one additional penny per egg not to confine laying hens in battery cages, so making these animals' lives 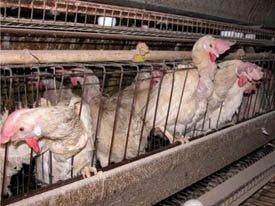 somewhat less intolerable may ultimately increase consumer prices by a few cents per dozen. But the opposition is well-funded and unscrupulous in their defense of cruelty, and will do and say anything they can get away with to defeat Prop. 2, so it is up to us animal advocates to expose the wider public to the truth of the matter.

One way to do this is to spread the word by sending emails to your friends, family and colleagues in California that include a link to online information. Also check out other ways you can get involved and support the campaign to pass the Prevention of Farm Animal Cruelty Act.