SF Zoo Tiger Shot for Answering Call of the Wild 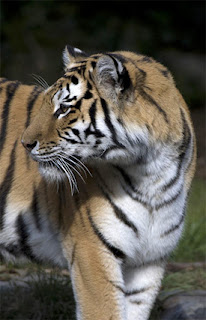 Tatiana on 10/26/2007, Photo by Matt
Knoth, licensed under cc3.0
On Christmas Day just after dusk, a four-year-old, 350-pound Siberian tiger named Tatiana escaped from her outdoor enclosure at the San Francisco Zoo, then killed a 17-year-old zoo visitor and severely mauled his two young companions before authorities shot her to death. This is reportedly the first time that a tiger has broken out of his or her confines at an accredited zoo, but as long as big cats are displayed for public pleasure, it may not be the last.

Not to make light of tragedy, but, being that I live in the City by the Bay, my mother phoned from Long Island the day after Christmas to make sure there were no ferocious tigers running loose in my neighborhood. I thought this was kind of funny but not unusual, since she usually calls me after every Southern California earthquake to make sure I’m OK. Admittedly (and perhaps obviously), a thorough understanding of geographical proximity doesn’t exactly run in our family, so it didn’t really surprise me that my mom might worry that a tiger could not only escape the zoo, but make her way 2½ miles up Ocean beach, and then head another 2½ miles east through Golden Gate Park to my apartment in the Inner Richmond District. Actually, if this were the country rather than a major city with cops, cars, and other urban hazards, Tatiana could have easily traversed that five-mile distance, so in a primal sense my mom’s fears were not so far-fetched after all.

I visited the SF Zoo with my parents about 10 years ago, when I was a vegetarian but hadn’t yet quite grasped the concept of animal rights. What I recall most clearly is that we observed the lions feeding in a public demonstration that zoo personnel continue to conduct six days a week. We entered the Lion House, which I remember as a large room with two perpendicular walls of lions behind glass partitions in three levels reaching up to a high ceiling. Dozens of other people watched with us as the lions ripped into slabs of raw red meat with their gigantic jaws, emitting guttural groans I could feel clawing right up my spine.

The SF Zoo also features public feeding of the tigers, but we missed that on our visit. In Defense of Animals (IDA) posits that these displays—in which tigers are coaxed into displaying aggression for the titillation of those who paid to see wild animals do something exciting—are partially to blame for the killing. Apparently, the tigers are in cages behind bars rather than glass during public feedings, and handlers have more direct contact with the animals. In fact, during one of these eating spectacles in December 2006, Tatiana decided to eat more than just the raw meat offered by a zookeeper, and chewed the flesh right off her arm.

Tigers at the PAWS Sanctuary

As a staff writer/editor for IDA, I had the privilege of joining 20 other IDA staff members and volunteers on December 10th for a trip to the Performing Animal Welfare Society's (PAWS) ARK 2000 sanctuary in San Andreas, Calif., where we saw a number of elephants rescued from zoos as well as some tigers. PAWS is a non-profit organization that only opens its doors to the public a few times a year, so if you ever get the chance to go, I highly recommend it, especially as an educational experience that will enable you to better compare zoos and sanctuaries for safety, comfort, and quality of life. For instance:

- You won’t find any public feeding going on at PAWS, and the tigers are never left unattended—keepers are on duty 24 hours a day, 7 days a week (whereas guards were not posted at the SF Zoo’s tiger exhibit during business hours when the Christmas attack took place). PAWS caretakers only interact directly with tigers for the administration of veterinary treatment. At a sanctuary, all interactions with the animals are for the animals’ benefit rather than ours.

- PAWS has 36 tigers living on acres of hilly woods behind the tallest, toughest fence you’re ever likely to see. On the other hand, the SF Zoo’s tiger enclosure, which held four animals before Tatiana’s death, is a rectangle that is merely one short city block in length (that is, less than 200 feet), and even narrower in width. And of course, we know all too well now that their exhibit’s safety features leave much to be desired.

- While profit-oriented zoos breed animals, buy them from dealers, or capture them in the wild for public display, PAWS is dedicated to rescuing animals from abusive situations. The tigers we saw were seized from a misnamed "sanctuary" called Colton Tiger Rescue. California state authorities brought criminal charges against the owner for selling tiger parts on the black market. Apparently, one can buy a tiger pup illegally for about $500, raise the animal to adulthood, and then sell their various body parts for upwards of $20,000. Another freaky fact the guide told us: Some narcotics dealers use tigers as guard animals at drug dens and laboratories.

Finally, I felt that the most convincing evidence of the superiority of sanctuaries over zoos was what I observed 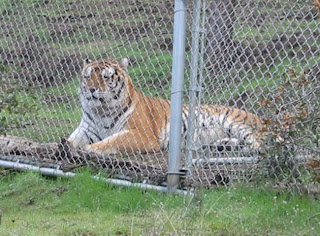 with my own eyes. I stood outside the tiger enclosure for about half an hour, and only two tigers came up to the public viewing fence for a close visit during that time (though others could be seen dozing in the distance). Of course I was greatly astounded with their size and presence, but it soon occurred to me that these tigers interacted with one another just like my two domestic cats, Zelda and Jasmine, do in my little apartment. That is, they seemed genuinely happy and content, and showed none of the neurotic symptoms you’re likely to see in cats at the zoo.

I would guess the reason for this marked difference is that these tigers are living for their own pleasure instead of someone else’s. I sincerely hope that SF Zoo officials, and those at other zoos around the country, will come to this realization, and send their tigers to accredited sanctuaries like PAWS and close their big cat exhibits for good.
Posted by Mat Thomas at 1:47 PM No comments:

What if there was no more Whopper, and would you want to live in such a world? This is the implicit premise of Burger King’s latest ad blitz “Whopper Freakout,” built around an “experiment” in which marketing researchers convinced customers the Whopper was discontinued and videotaped their reactions, both secretly with hidden cameras and posing as television news reporters.


In the first of what promises to be a series of excruciatingly insufferable commercials, Burger King starts out by setting an air of deadly seriousness with grave voiceovers and ominous electronic drone-music. A cashier then tells a customer that “We no longer carry the Whopper,” after which several people are shown apoplectically contorting their faces and making outraged demands to see the manager. Finally, a guy with a goatee coolly declares (with misogynistic and/or homophobic pride), “If Burger King doesn’t have the Whopper, they might as well change their name to Burger Queen,” and it ends with a frighteningly-irate man barking “Get me a Whopper!” as a threatening command.


While this slice of reality-TV propaganda is currently unavailable for viewing on the Internet, Burger King did post a 7-minute-plus video documenting their “experiment” at whopperfreakout.com which presents the deception as though it were actually a legitimate scientific study. At the end, the melodramatic narration states Burger King has proven “that the Whopper is, as we thought, ’s favorite.” But you may wonder, does showing Burger King junkies freak out when denied their favorite fix of flame-broiled flesh really prove that the Whopper is ’s favorite?


Answer: Of course not.
First, the people in the commercial deliberately came to Burger King specifically to order a Whopper. This biased sample group does not represent – especially the 4.7 million adult vegetarians in the and tens of millions of carnivorous Americans who do not eat Whoppers for health, environmental, religious, or aesthetic reasons.


Second, McDonald's and KFC's customers would "freak out" too if they couldn't get a Big Mac or the Colonel’s fried chicken. Any competing fast food chain could have made the claim to “’s favorite” junk food or whatever if only they’d thought of this cheesy marketing gimmick first. Such a corroborating “study” conducted by a rival company would put Burger King’s claims in proper context by making it clear that meat junkies have their preferred poisons, and will freak out (and make complete asses of themselves) when they can’t feed their particular bloodthirsty habit.


Furthermore, by presenting the Freakout as something supposedly momentous, Burger King trivializes the lives and deaths of millions of cows who are murdered every year to make Whoppers. Cattle are branded, castrated and dehorned without anesthetic, and sometimes remain conscious as their hooves are chopped off and they are skinned. But in profit-driven mass-media advertising, these atrocities are framed as insignificant when the addictive appetites of paying customers are at stake.


I say, if Burger King wants to see a real Whopper Freakout, their future TV ads should include footage from inside their supplier’s slaughterhouses so Americans can actually see who the Whopper is really made of. If you think Burger King should do real Whopper Freakout commercials, call or write the company to let them know (but, if you can, try to be more polite than me: remember that the point is to make a statement, not hassle an individual employee who’s just trying to make a living).
Posted by Mat Thomas at 10:51 PM No comments: