When I worked at the University of California, Davis (circa 1998-99), burrowing owls occupied underground nests around my workplace, the Carlson Health Sciences Library, which lies on the relatively remote outskirts of the UC system's largest campus. I loved watching them peek their little heads up through holes in the earth, and would stand awed as they unselfconsciously stared back at me with an intensely palpable awareness and fierce dignity. So, because burrowing owls are such an integral part of my personal natural history (not to mention the Dead Milkmen's timeless post-punk epic "Stuart"), I feel a strong emotional connection with these downy-feathered cutie-pies — and a commensurate outrage that government agents paid with our tax dollars to protect wildlife are continually bending over for business interests that don't give a flying hoot about owls.

This time, an established community of these unique birds is slated for expulsion from their habitat in the East Bay town of Antioch, California because the state's Dept. of Fish & Game is allowing real estate prospector Kiper Homes to proceed with construction of the Blue Ridge housing development. Workers have already started placing one-way eviction doors (that allow residents to leave but not return) over many of the burrows' tunnel openings, a job that by law must be completed by next month (before the owls' breeding season begins). Then Kiper will complete the foreclosure by caving the den in so the birds can't come back, and exterminators will proceed with gassing the remaining ground squirrels to death as a mere formality.

It is estimated that there are probably fewer than 10,000 burrowing owl breeding pairs left in the U.S., and yet 11 members of this native species are being forced out of their habitat in the middle of winter just before they are about to reproduce. Perhaps, being unable to quickly find safe, secure and suitable shelter, some or all will die from exposure to the winter elements or predation. The U.S. Fish & Wildlife Service has officially identified burrowing owls as a "candidate species" for either “threatened” or “endangered” status, and California considers them a "Species of Special Concern" under the state's Endangered Species Act because their population has declined by about 50 percent in the last 10-15 years. The number one jeopardizer of their existence: real estate development.

Surely the anthropocentric will protest, “Hey, they're just owls — and people need places to live more than they do!” But why do we have to build on land already occupied by members of a species whose numbers are rapidly dwindling? There are over 300 million humans in the U.S., and only a few thousand burrowing owls: is spreading suburban sprawl really such a boon to our society that it justifies risking the irreversible eradication of a species?

And yes, all kinds of creatures are summarily displaced and killed whenever houses and neighborhoods are built, and even we animal activists take this so much for granted that it usually passes without mention — until the animal under the bulldozer is both adorable and potentially threatened or endangered. In this case, for instance, we may feel bad for the owls, but (if we really think about it) even worse for the squirrels. So, in the long view, we need to radically reinvent construction practices to minimize our destructive impact on the environment and those already living in it.

Realistically, anyplace we build will be home to some form of fauna or flora, and animal and environmental advocates can't save them all. So we have to start somewhere, and it makes pragmatic sense to focus first on the most ecologically vulnerable. Then again, these are not actually separate issues, because by stopping the development of this particular housing complex (and others like it in the future), we can save both the owls and the squirrels. 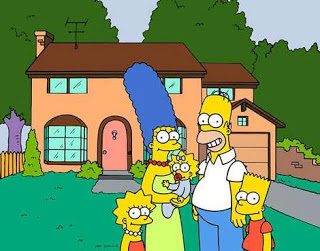 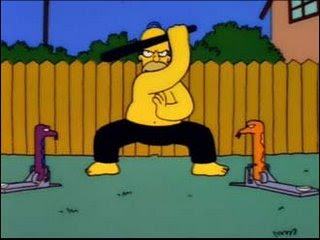 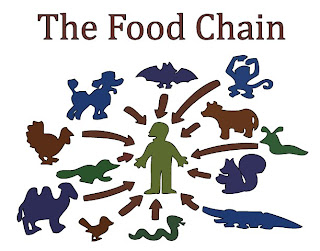 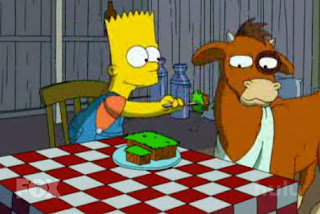 Hope you enjoy these amazingly amusing episodes — and learn more about “The Simpsons” at thesimpsons.com!
Posted by Mat Thomas at 5:24 PM 5 comments: