After a year of weekly demonstrations by animal advocates that garnered national attention, fourth-generation fur salon Schumacher Fur and Outerwear is leaving the location it has occupied in downtown Portland, Ore. since 1895. This is a major victory for those who ethically oppose the multi-billion dollar fur industry that every year kills over 40 million minks, foxes, rabbits and other species for clothes and fashion accessories. 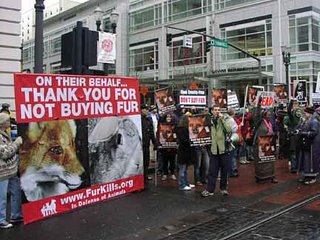 The Schumacher campaign started in 2005 on Fur Free Friday, a national event held annually for the last 20 years on the day after Thanksgiving (the busiest shopping day of the year also known as “Black Friday”). That year, some 100 activists turned out for IDA's annual march through downtown Portland, a socially and politically progressive city that is also a hotbed of animal rights activity.

Inspired by this success, a group of grassroots activists began holding demonstrations outside of Schumacher’s every Saturday. Otherwise known as the Schumacher Fur Street Party, the weekly protests were typically attended by dozens of activists in a festive atmosphere replete with costumes, creative signs and camaraderie. Matt Rossell, the Outreach Coordinator for Northwest In Defense of Animals, became the group’s unofficial spokesperson when media started covering the story, drawn by the bizarre antics of store owners Gregg and Linda Schumacher.

For example, the Schumachers, along with their employees and supporters, taunted, threatened, spit on and even assaulted protesters, shoving them and knocking signs from their hands. A Schumacher employee made death threats to a high school teen delivering a speech about the fur industry’s abuse of animals at the store’s doorstep. A sign in their window stated that "All protesters should be Beaten, Strangled, Skinned Alive, Anally Electrocuted and Clubbed." These heavy-handed attempts to drive demonstrators away only amplified their resolve and numbers.

Schumacher complained incessantly to authorities, calling the protesters “terrorists” despite the fact that police witnesses testified that participants were acting within their first amendment rights. The Mayor tapped Rossell to represent the protestors in city-sponsored mediation, but the Schumachers dragged their heels and finally refused to participate after activists proposed labeling fur garments with an accurate description of how animals used to make them are killed. Throughout the year, the media fed on the story, with Rossell reminding them at every turn that the real victims are fur-bearing animals—not the Schumachers, as the couple repeatedly claimed.

Just days after Fur Free Friday 2006, when 200 activists marched through Portland’s streets, the Schumachers announced they were moving to a new location. As activists celebrated, Rossell took a broad view. “The real victory need not be measured in moving sales, because with the global media coverage this outreach campaign generated, the story is not just about a single store or city: it’s about spreading a message of compassion for animals for the whole world to hear,” he said. “IDA will continue promoting a consumer warning tag on all fur sold in Portland, and perhaps even propose a citywide ban of fur sales.”

Learn more at furkills.org.
Posted by Mat Thomas at 11:17 AM No comments: