New Yorkers: Urge your Senators to vote YES on S.2247

“The African is incapable of self-care and sinks into lunacy under the burden of freedom. It is a mercy to him to give him the guardianship and protection from mental death.”
– Former U.S. Vice President John C. Calhoun regarding slaves (circa 1844)

“This notion that they need to rest is completely futile. They don’t like to rest. They want to work seven days.”
– Hudson Valley Foie Gras Co-Owner Izzy Yanay regarding farmworkers (circa 2009)

It is our moral obligation as citizens of a democracy to ensure that every worker in America has the same basic rights as every other, regardless of what job they do. Yet even now in the 21st century, as the result of a 71-year-old compromise with segregationist Dixiecrats during the New Deal era, those who toil in New York State’s agricultural fields and factory farms are still denied the fundamental benefits that the rest of us take for granted. And I’m talking here about some of the most basic employment expectations, like getting at least one day of rest a week, disability insurance, collective bargaining options, and overtime pay for working extra hours.

Though California passed the first laws rectifying this disparity in the mid-1970s and most other states have since followed suit, New York still suffers the unrepentant repercussions of blatantly racist government policies more than seven decades after their codification. To redress this longstanding injustice, a broad coalition of labor advocates, student activists, religious groups, and state legislators are now unifying behind the Farmworkers Fair Labor Practices Act (A.1867/ S.2247), and after a long struggle are finally within reach of victory. I’m glad that some animal advocates have already cast their lot with the workers, but hope that the animal protection movement as a whole will join them in this fight for equal treatment under the law, because:

1) We vegans eat the New York-grown apples, grapes, potatoes, corn, cabbage, and other plant foods that farmworkers help raise and harvest, and our purchases may well be subsidizing an exploitive system that denies tens of thousands of people the guaranteed protections that we enjoy.

2) If he were alive today, trailblazing farm unionizer and fellow vegan Cesar Chávez would be leading the charge for these workers’ civil rights.

3) Of the approximately 80,000 farmworkers employed by New York State’s multi-billion agriculture industry, more than half are documented migrant workers and illegal immigrants of Latino descent who are compelled to endure terrible working conditions under threat of losing their livelihoods and being forced out of the U.S.

4) There is no ethical justification for economically discriminating against people based on ethnicity, class or nationality.

5) Achieving parity for those working in factory farms will also dramatically reduce incidences of animal abuse.

Workers are Animals, Too

There are probably some animal advocates out there who would argue that siding with people who harm animals for a living is speciesist because it prioritizes farm workers’ interests over animals’ well-being. While I acknowledge the kernel of philosophical legitimacy at the core of this claim, I would counter by pragmatically pointing out that ignoring the farmworkers’ plight helps neither them nor the animals, but rather bolsters the power of those who abuse both — the factory farm owners. Just as Nobel Prize-winning author and holocaust survivor Elie Wiesel said, “We must take sides. Neutrality helps the oppressor, never the victim. Silence encourages the tormentor, never the tormented.” In this case, the only way we can take the animals’ side is by siding with the workers against the industry that oppresses them.

Please bear with me while I explain. These laborers typically work 60 to 70 hour weeks, and yet most still live below the poverty line. Many are allowed to reside in the U.S. only temporarily via the H-2A guest worker program, which strictly prohibits them during that limited period from working for anyone besides the employer who originally hired them. Such restrictions leave these legal workers completely at farm owners’ mercy, and reluctant to petition for even the meager protections they are entitled to because reprisals could very well entail not only job loss but summary deportation.

Meanwhile, the health and safety risks most factory farm hands undergo on a daily basis are far beyond what American workers in virtually every other industry are ever exposed to. Being kicked by cows and bitten by pigs are the least of these hazards: peer-reviewed field studies indicate that an inordinate number of U.S. farmworkers are afflicted with acute and chronic respiratory diseases from constantly inhaling air that is rife with toxic gases emanating from the tons of feces and urine expelled by farm animals at a typical concentrated livestock facility. Farmworkers also suffer disproportionately from symptoms such as diarrhea, nausea, abdominal pain, vomiting, and fever, but show up to work every day without fail because their employers are not required to provide them with paid sick leave, and taking a day off without pay could mean losing one’s job altogether.

On Down the Food Chain: Victims Become Victimizers

As far as how this affects farm animals, think about it: such vulnerable employees are unlikely to report labor law violations, so they certainly aren’t going to speak up when someone breaks the state’s minimal animal welfare statutes. In fact, surveys show most farmworkers are never even informed that such laws exist. What’s most disturbing and destructive about this situation is that the frustrations caused by working excruciatingly long hours for low wages in stressful and often dangerous conditions greatly increase the probability that farmworkers will commit egregious acts of animal cruelty.

First, it’s essential to understand that the factory farm environment is intrinsically antithetical to ethical norms. Consider, for example, what workers go through every day at Hudson Valley Foie Gras in Upstate New York. Inside giant warehouses, tens of thousands of ducks are confined in body-sized stalls and force-fed excessive amounts of corn-mash for a period of 30 days before they are killed and their bloated and diseased livers 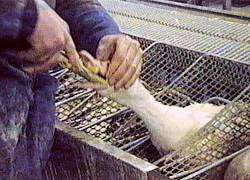 harvested for a high-priced gourmet delicacy. Once the compulsory gorging cycle begins, the birds will only accept food from the same person at each meal, so workers (who must individually feed hundreds of animals each day) spend about 12 hours a day (interspersed throughout each 24-hour period), seven days a week for four full weeks shoving pneumatic tubes down ducks’ esophagi and pumping them full of food. On the 31st day, some workers get a day off, then come back to work after a 24-hour leave to start the cycle all over again.

Second, if this sounds sick to you, remember: the agriculture industry seriously maintains that these conditions are perfectly normal, healthy and “humane” for both the workers and animals. To reiterate, the description above is not an aberration but the legal and accepted norm for American foie gras production, and similarly horrific conditions are common at other factory farms. Yet, as we animal activists know all too well from viddying ultraviolent sinnys of undercover investigations showing workers kicking chickens like footballs and lethally smashing piglets’ heads against the floor, superfluously abusive incidents are also all too common behind the bloody walls of these licensed hellholes.

The New York State Assembly has already passed their version of the Farmworkers Fair Labor Practices Act (A.1867), and 28 of the 32 votes we need for a majority in the Senate have been secured. It’s therefore looking pretty good, but influential agribusiness lobbies are actively pressuring lawmakers to defeat this measure, so we need to make one final push to get this bill passed. With the Senate due back from their summer recess in September, you can make a difference now by checking whether your State Senator is already a co-sponsor of S.2247. Depending on their status, contact their office and take one of the following actions:

- If they oppose: Tell your Senator that, as a constituent and a voter, you strongly believe in equal treatment under the law for farmworkers, and urge them to reconsider their position on this important issue. You may wish to mention that polls show New Yorkers overwhelmingly support expanded rights for farmworkers.

- If they are already on board: Let your Senator know that you greatly appreciate their support for this bill, and urge them to 1) persuade their colleagues who have not yet signed on that it is time for New York to stop denying farmworkers the fundamental rights they have earned and deserve, and 2) work to put this bill on the legislative agenda so the full Senate can finally vote on it.
Posted by Mat Thomas at 11:56 PM