New AnimalVisuals infographic geographically displays video exposés by species and state for easy access & panoramic analysis
Undercover video investigations are inarguably among the most effective means of exposing the legal and illegal animal cruelty being committed in laboratories, fur and puppy mills, circuses, and rodeos. Recent technological advances in video surveillance devices have made them both smaller (and therefore easier to hide) and able to capture higher-resolution images—facilitating the proliferation of such muckraking exposés. In the last decade, clandestine activists have increasingly turned their cameras toward factory farms and slaughterhouses, revealing a hidden world where many “food” animals raised for meat, milk and eggs are sadistically beaten, confined in cages so small that they can barely move, and slaughtered while still visibly conscious.
The impact of these shocking images on public opinion and the animal agriculture industry has been profound. They’ve led to criminal animal cruelty convictions against farm workers and agribusiness companies, plant closures, major food recalls, significant corporate policy changes, public demands for stricter animal welfare laws as well as increased enforcement, and passage of landmark legislation in numerous states. It’s therefore no wonder that animal enterprises see video exposés as a threat to their profits, and have enlisted some state legislators in a cynical bid to criminalize the very act of documenting the animal cruelty being routinely perpetrated on factory farms.
I recently wrote extensively about these proposed “Ag Gag” laws in a series of interviews with representatives of the “Big Four” animal protection groups that have conducted most of the undercover factory farm investigations: namely HSUS’s Paul Shapiro, COK’s Erica Meier, MFA’s Nathan Runkle and PETA’s Jeff Kerr. Of the four bills proposed so far, those in Minnesota and Florida have been defeated, but political pawns of the animal agribusiness industry in Iowa and New York are still trying to pass these misguided attempts at censorship. Ironically, their efforts to ban undercover video investigations have backfired in that they have drawn more attention to the abuses these exposés reveal, further educating people about where their food comes from and emphasizing the importance of this information to society at large.
The Factory Farm Investigations Map 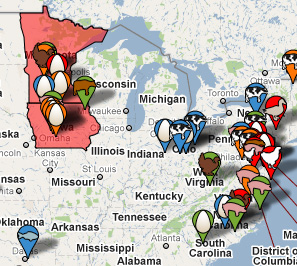 Here’s a prime example of such unwanted publicity. In response to the recent legislative attempts at outlawing undercover investigations, graphic designer, illustrator and computer whiz Mark Middleton created a new map on his AnimalVisuals website that gathers together in one place the 48 undercover factory farm exposés conducted by the Big Four animal advocacy groups in the US since 1998. Take a look at the map for yourself, then come back here to learn how animal activists can use it to both inform the public about factory farm cruelty, and why the movement should strategically strike out into virgin territory with new investigations.
As you can see, the map is very easy to navigate: colored pins represent the Big Four organizations, and cartoon animal icons indicate the type of investigation by species (or animal use, in the cases of broiler chickens vs. egg-laying hens and beef cattle vs. dairy cows). Switch to “satellite view” (in the upper right-hand corner of the map) and zoom in to see a photo image taken from outer space pinpointing a factory farm’s precise location—something that only government spies would have been able to do just a few short pre-Internet 2.0 years ago. You can also scroll down past the map for a chronological list of investigations that specifies the state, date and species associated with each one.
Benefits of Mapping
AnimalVisuals’ factory farm investigations map can be an incredibly useful tool for raising awareness of agribusiness’ systemic animal abuse and the informational value of undercover exposés:
- The Public: Putting all the key investigations on one website gives people easy access to videos and information about factory farming’s abuse of animals. The fact that there are so many exposés also highlights the breadth of animal cruelty taking place on factory farms. As Middleton writes on the AnimalVisuals site, “Viewed individually, the actions shown might be dismissed as isolated incidents. Taken together, however, they reveal a pattern of disregard for animal welfare and routine cruelty-to-animals throughout animal agriculture.” People who view the map and videos cannot deny that cruelty is horrific and endemic throughout the animal agribusiness industry, making them more likely to question their dietary habits and consider more compassionate alternatives (such as eating fewer animal products or becoming vegetarian or vegan).
- Activists: Watching videos of animals being tortured and slaughtered may not be your idea of a good time, but it is eye-opening. Many vegetarians and vegans have told me that they already know what happens on factory farms, so they don’t need to watch any more videos documenting the horrors hidden behind their walls, and don’t want to because it upsets them. Of course, meat eaters are the ones who really need to see these videos because they probably don’t know what happens on factory farms—but how can we animal advocates expect them to watch if even we won’t? So view a video (or two or three), then click the link in the upper right-hand corner of the screen to share the map on Facebook, Twitter or email with a note encouraging your friends and followers to watch a specific video exposé that personally affected you.
- Investigators: The map highlights the country’s informational “black holes”—especially the 29 states where none of the Big Four animal protection organizations has yet conducted an undercover investigation. Some states may be “blank” right now for various reasons. For instance, investigations tend to cluster around the areas where the Big Four are based, and there are ten states where trespassing on private property to conduct surveillance is illegal. However, in states without such laws, there would be considerable advantages to putting more factory farms “on the map” with undercover exposés. For one thing, it would make people living in those areas more aware of what is being done to animals on farms in their states. For another, it would put factory farmers throughout the nation on notice that they are not invulnerable to exposure just because they operate in a state that hasn’t yet been mapped by pioneering undercover investigators.