It is often difficult for people to truly comprehend the suffering that animals on factory farms are subjected to on a daily basis. Facts and figures are informative but can be abstract and intangible compared to actual reality, while videos documenting the conditions animals endure usually show their suffering from the human angle — from outside the cage, so to speak. 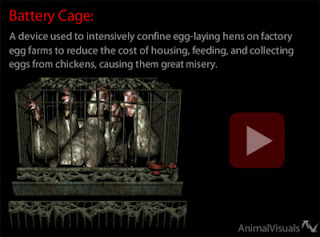 ted by artist, web developer, and animal rights advocate Mark Middleton, the VBC was modeled and textured in Blender 3D, and uses Adobe Flash and Papervision 3D to create an experience like a QuickTime Virtual Room (QTVR). Such "spherical panoramas" have been around for a number of years now, but this is the first time anyone has used this emerging technology to expose animal exploitation.

Middleton says he created the Virtual Battery Cage "to compel viewers to empathize with caged hens by seeing their world from their point of view, and to show that chickens are not just things, but actual living beings whose feelings matter. I also wanted to make something interactive and interesting that would attract viewers to the facts about the misery that chickens suffer just so humans can eat their eggs."

Many of these facts are included on Middleton's animalvisuals.org website, complementing the audiovisual sensory experience. For instance, an estimated 95% of egg-laying hens raised in the U.S. (about 300 million birds a year) are intensively confined in battery cages, with each cage holding 5 or 6 birds on average, but sometimes up to 10. The cages are so small that the hens wouldn't be able to spread their wings even if they were individually caged, but the average amount of space given each bird is only about two-thirds the size of a standard sheet of paper. This is barely enough to even sit in, yet this is where laying hens spend their entire lives.

Crammed together in battery cages for months on end, chickens are prevented from engaging in even the most basic natural behaviors, like nesting, perching, scratching, foraging, dust-bathing, exploring, and stretching. Their intensive confinement contributes to serious health problems, including respiratory diseases, and broken bones and foot disorders from constant contact with wire floors. Though chickens can live for more than 15 years, their egg output starts to wane after about two years on factory farms, so they are sent to slaughter, but not all of them even survive that long. Use your mouse to scroll around the VBC environment, and you'll find a dead chicken lying on the ground among her living cage-mates.

So, whether or not you still eat eggs, visit the VBC to get a glimpse of what it's like to be inside a battery cage on a factory farm. When you see the sights and hear the sounds that comprise a lifetime of suffering, you may be inspired to act, whether by foregoing eggs or educating others about factory farming cruelty. Here's an easy way to start: forward the VBC to your family and friends and encourage them to take a look around.

And check out my 8-page feature article The Road to Vegetopia: (Re)Imagining the Future of Food with illustrations by VBC designer Mark Middleton, from the March 09 issue of VegNews magazine!
Posted by Mat Thomas at 5:50 PM