Anarchy in the UC

I am an antichrist 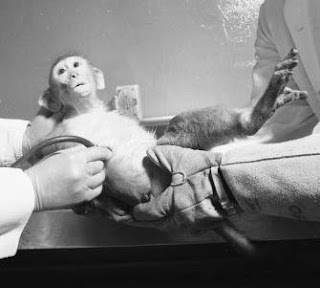 - The Sex Pistols, from "Anarchy in the UK"


The FBI recently made the first arrests for violations of the Animal Enterprise Terrorism Act (AETA) by charging four animal rights activists with using threats and physical force to intimidate University of California (UC) biomedical researchers into abandoning their animal experimentation careers. Here are the basic allegations against the accused:

- Holding protests with other activists outside the homes of UC Berkeley and Santa Cruz vivisectors, where they marched and chanted slogans.

- Trying to force their way inside a researcher’s house and throwing an unidentified "object" at him while shouting verbal threats.

- Producing and distributing fliers with the names, addresses and phone numbers of UC animal experimenters. The FBI found the fliers right before the homes of two UC Santa Cruz researchers were firebombed.

Note that the four arrested activists have not been charged with the firebombing, nor for physically injuring anyone, but mainly for actions that could potentially provoke someone to commit acts of violence. While these actions fall within Americans' First Amendment rights, each defendant could spend up to five years behind bars if convicted. Now, if you think the prospective punishment for these crimes seems harsh, it is, relatively speaking: consider, for example, that under California state law, assault and battery is punishable by a stint in jail "not exceeding six months," and the average prison sentence served by a child molester in the U.S. is about three years.

Perhaps sentencing under the AETA is more severe because it is the only law of its kind, in that it applies exclusively to the animal exploitation industry. That is to say, if you used these activists’ exact tactics against, say, the executives of a logging company that was clear-cutting an ancient forest, you would not be penalized as strongly as you would be if your target was a fur farm. No other industry enjoys such legal protection and privilege.

What Happens at UC, Stays at UC

The ktvu.com news article from which I first learned of the activists’ arrest reads like a self-congratulatory FBI press release, and conspicuously fails to mention any of the animal experiments taking place at UC Berkeley/Santa Cruz that so enraged the accused. Referring, for example, to the activists as "extremists" three times in the text is just biased journalism. Sadly, such selectively partisan coverage is typical of the mainstream media, which just loves sensationalistic story arcs with clear-cut heroes, villains and victims (cops, criminals & upstanding citizens), but is consequently incapable of treating this subject in an objective, balanced manner.

Apparently, the mainstream media mentality holds that merely questioning the ethics and efficacy of biomedical research on animals amounts to rewarding those who took illegal action against it — then, supposedly, the "terrorists win" in some way. That kind of moral blindness misrepresents reality by omission of a crucial perspective. That is to say, even if the vast majority of the populace is disgusted by how the "extremists" expressed themselves, that does not make the cause they speak for any less just or crucial, and yet the media is shirking its responsibility to inform the public about the legally-sanctioned cruelty being perpetrated at public institutions of higher learning under the guise of scientific progress.

To fill in some of the missing facts, here’s a brief overview of UC Berkeley’s animal research program. About 40,000 animals are used in experiments at the school’s Northwest Animal Facility every year. These largely taxpayer-funded projects include, for example, such "medical advances" as implanting electrodes and other devices in the brains of captive and clinically-controlled primates, cats and songbirds. Meanwhile, Berkeley is in the process of building a new $266­-million Center for Biomedical and Health Sciences (complete with an expanded underground vivisection lab) that will more than double the current facility’s size. And remember, Berkeley is only one of ten UC campuses, and hundreds of thousands of animals are killed in research every year throughout the UC system.

As an animal advocate, I identify with the arrested activists’ frustrations and motivations, but disagree with their alleged approach because, on a psychological level, actual or perceived threats only galvanize sentiment for those targeted by intimidation while reinforcing existing negative prejudices against the animal advocacy movement. I subscribe to Carol Adams' view that intimidation tactics are driven by traumatic knowledge of the vast scale of animal suffering caused by humanity, and that projecting our subsequent rage onto others is counterproductive and generally unhealthy for everyone involved. I strongly believe that coercion rarely (if ever) brings about a positive outcome, but violence is so ingrained in our society that some people feel making threats is the only way they can effect change in the world.

Yet media bias paradoxically bolsters the "extremist" position by holding a tight spotlight on a small fraction of "outlaw" activists while blacking out the much larger community of law-abiding activists who perform the groundwork of public outreach and education. Mainstream news stories about animal rights "violence" against vivisectors are common, but reporters are nowhere to be found when people gather legally and peacefully at demos against UC’s use of animals. So apparently, animal advocates are only worth paying attention to when we break the law.

Still, it was heartening to see more commendable media coverage last year of other major animal stories, including the Proposition 2 victory in California, the Chino slaughterhouse scandal, and Michael Vick’s conviction for dog fighting. The common thread between these three stories is that they all centered on either enforcing the law or creating new ones. So, in pragmatic terms, working the law rather than breaking it seems to be having a better actual impact on how animals are viewed and treated by humans, especially over the long term.

So we don’t need to threaten or intimidate others to have a real and sustained impact for animals. Tenzin Gyatso, the 14th Dalai Lama, is an excellent exemplar of holistic and peaceful social activism, and right now I’m reading one of his many books, which is entitled Healing Anger: The power of patience from a Buddhist perspective. His teachings about the need to cultivate a disciplined temperament and channel anger appropriately in the face of adversity are based on the Bodhisattva vow, which means dedicating one's life toward the welfare of others. As an example, here is one excerpt that explains our responsibilities to our "enemies" (say, those practicing vivisection):

"One of the reasons there is a need to adopt a strong countermeasure against someone who (causes harm) is that if you let it pass, there is a danger of that person becoming habituated to extremely negative actions, which in the long run will cause that person’s own downfall and is very destructive for the individual himself or herself. Therefore, a strong countermeasure, taken out of compassion or a sense of concern for the other, is necessary. When you are motivated by that realization, then there is a sense of concern as part of your motive for taking that strong measure."

As a Bodhisattva-wannabe, I want to save as many animals as I can and "enlighten" as many people as possible about the need to respect all forms of life. That entails emotionally engaging the anger, outrage and despair I feel over humanity’s crimes against animals, and hopefully taking "strong countermeasures" grounded in kindness that will ultimately (in Buddhist terms) benefit all beings. Basically, in order to stop demonizing people who know not what they do to animals and themselves, I must first reconcile with my own demons, for only universal compassion has the power to transform consciousness.

If you live in the Bay Area and want to join an established grass-roots effort against animal research, check out Berkeley Organization for Animal Advocacy (BOAA) online or attend one of their weekly Wednesday evening meetings.
Posted by Mat Thomas at 8:46 PM