“I hate how the horse-drawn carriage industry is being attacked nowadays,” he said during the interview segment. “Animal activists, you know, (say) the horses are being treated cruelly because they’re pulling a carriage around half a mile. I mean, these are the fittest, well-fed (sic), best kept 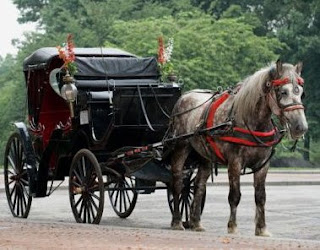 horses I’ve ever seen.” And Neesom goes on like this for awhile, raving about how great the horses supposedly have it, and that he knows this because he's visited their luxurious stables and talked to the drivers, and because he’s been “a horse rider and lover for many years.”

A horse lover? Really, Liam? Well, I have to say that willfully denying the overwhelming evidence of tragic suffering endured by equines on the streets of New York City seems a strange way to love horses. And the reason we animal advocates are fighting this infernal industry is not because the horses are “pulling a carriage around half a mile” — to characterize and minimize our valid concerns in this way is offensive to both us and the victims of injustice we are sincerely trying to help. To back up my assertion that New York City's carriage horses are indeed suffering greatly, here are some disturbing facts that Mr. Neesom apparently doesn’t know, or perhaps thinks are irrelevant:

According to an audit by the City Comptroller, the horses used to pull carriages in New York City are subjected to some of the worst conditions of any working animal. In summertime, they are forced to walk on burning asphalt and don't have access to enough fresh water, making heat exhaustion and other more serious problems common. They often trudge along in bumper-to-bumper traffic, breathing exhaust fumes all day long, which causes serious respiratory problems, and constantly walking on hard concrete also contributes to hoof and leg disorders. Horses are often left standing in their own filth due to insufficient drainage systems, and are routinely whipped by drivers to make them move.

In addition, there is no mandatory retirement age for carriage horses, so they can literally be worked to death. Yet most don’t live that long: the average lifespan of a carriage horse in New York City is only 4 years, compared (for example) to 15 years for a mounted Manhattan police horse. This is mostly due to the harsh conditions described above, but also partially because horses are so easily frightened by the loud noises and sudden movements of speeding motor vehicles, and have consequently caused numerous traffic accidents, many of which resulted in horses dying. Finally, when carriage horses are too broken down or injured to work anymore, many are sent to slaughterhouses in Mexico or Canada where they are killed for meat.

It is for these reasons that a coalition of animal advocates has formed behind legislation introduced by Queens Council Member Tony Avella that would finally ban horse-drawn carriages in New York City. “The romanticized idea of enjoying a carriage horse ride through the streets of Manhattan can no longer justify the risk of serious injury or death to these animals or to the public at large,” said Councilman Avella. “It is time to put the horse driven carriage industry out to pasture.”

A Tradition of Exploitation

Back in the late-19th and early-20th centuries, before New York City's streets were paved and teeming with cars, trucks, buses, and motorcycles, the horse-drawn carriage might have been considered an essential form of transportation, sort of like hailing a cab is today. But it’s the 21st century, and carriage horses are now nothing more than an anachronistic tourist attraction in a densely-populated and technologically modernized urban center.

Other major cities around the world — including Paris, London and Toronto — long ago banned horse-drawn carriages from their streets. Yet according to Neesom, we should keep making horses pull carriages in New York City because “they have been there for a hundred years” and “they’re an iconic part of New York.” In a recent letter to the City Council, Neesom also wrote that he is “deeply disturbed by the unnecessary and misguided political and extreme rhetoric against the horse-drawn carriage industry.”

When one considers all the facts, animal advocates are clearly anything but “misguided” and “extreme” in their claims or actions. However, given Neesom's insistence on the matter, I have to wonder: has he researched this issue at all, or is this self-styled “horse lover” just talking out of his ass? I mean, really: how can anyone seriously profess to love horses while actively defending an industry that so egregiously abuses them? Has Neesom no shame, or is he just woefully ignorant? Has he no compassion for suffering animals, or is he merely blind to their misery? For my own and the horses’ sake, I’d very much like to know.

Please attend the City Council Consumer Affairs Committee’s public hearing on Councilman Avella's two bills concerning carriage horses, and consider providing two minutes worth of testimony in support of this humane legislation. The meeting is scheduled to take place on Friday, January 30, 2009, at 10:00 a.m. on the 2nd floor of City Hall.

And if you can’t attend the meeting:

- The horse-drawn carriage industry is mainly supported by tourists, so when friends and family visit New York City, please don't let them get taken for a ride!
Posted by Mat Thomas at 3:25 AM