Sudden increase in animal-on-human attacks may be revenge-motivated, say some scientists

I know it sounds like I'm making this up, but I'm not: some scientists now actually believe that drastically rising incidences of animal-on-human violence around the world are due at least partially to a concerted effort by various members of the animal kingdom to exact vengeance upon humanity for all the atrocities we have committed against them. A radical shift in how animals interact with humans is taking place, they say – and it may be because other species are becoming aware in some new way of their mass-enslavement and victimization by none other than the human race. I have hazy childhood memories of a badly-acted made-for-TV natural disaster movie from the late-seventies in which this was actually the plot: who would've predicted back then that this schlocky premise wouldn't necessarily turn out to be so farfetched after all?!

I learned about this zoogenic conspiracy from a fascinating article entitled “Mad cows (and livid lambs)” that appeared recently in the Telegraph, a British newspaper. Citing the statistically-astonishing rise in animal attacks on humans over the last few years—ranging from elephants, chimpanzees and sharks to dogs, mountain lions and badgers—journalist Will Storr bolsters the assertion that nature may be turning on us by including informed observations from respected field researchers and numerous stories of real-life animal attacks. He also clearly conveys what is perhaps the most crucial component of this equation, which is that modern scientific research overwhelmingly indicates animals are far more intelligent and aware than even most animal lovers had assumed.

Meaning, significantly, that before scientists could even consider the possibility that other species may be revolting against us for destroying their habitats and slaughtering their families en masse, they first had to give animals credit for being smart enough to recognize the cause of their suffering and where to seek retribution. Logically, the theory implies that animals must have complex thoughts and emotions – an intricate inner life from which they respond to the outer world. Someday, when researchers conclusively prove this to be true, it will radically transform humanity's view of animals – and, hopefully, our treatment of them.

One of the leading voices in the scientific movement towards getting people to recognize the depth of animal consciousness is vegan ethologist and author Marc Bekoff, who is quoted extensively in the article. Bekoff (a Professor Emeritus of Ecology and Evolutionary Biology at the of , who has collaborated with Jane Goodall) says that animals are almost certainly motivated by revenge in some situations. However, judging from the article, he seems to approach cautiously the idea that a pan-species rebellion is underway across the globe.*

But this is precisely what some scientists are suggesting. Gay Bradshaw, a world-renowned elephant expert and director of the Kerulos Centre for Animal Psychology and Trauma Recovery, believes that “What's happening today is extraordinary. Where for centuries, humans and animals lived in relatively peaceful co-existence, there is now hostility and violence.” The evidence presented by Bradshaw and her colleagues that recent elephant rampages are tied to the species' psychological traumatization has gained some notable interest from animal researchers and even the general public. Bradshaw and other researchers simply expanded their perspective beyond marauding gangs of juvenile-delinquent pachyderms as the number and range of animal attacks from across the species spectrum rapidly accelerated.

“Animals have the same capacity that we do, in terms of emotions and what we consider to be high-mindedness and moral integrity,” she said. “In fact, I'd argue they have more, because they haven't done to us what we've done to them. That's a sobering thought. It's amazing that all the animals are as benign as they are. It's amazing their restraint. Why aren't they picking up guns?”

Ironically, this sentiment is consistent with what the National Rifle Association (NRA) suggested could happen in an illustration from one of their fundraising booklets, which I addressed at length in January 2007 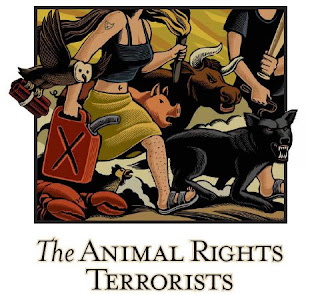 right here in this very blog. "Even though the picture is pure fantasy," I wrote, "I think it is an accurate rendering of the NRA's deepest fears: that the future holds wild packs of pissed-off animals roaming the post-McDonald's® wasteland seeking vengeance against their bipedal oppressors. Obviously, once animals are freed, they will kill and enslave humans in retribution. Kind of like the old adage that if we didn’t hunt, eat, experiment on and otherwise torture and kill animals, they’d all either die of starvation or take over the world…"

So it seems I may have gone off a little half-cocked there in mocking the NRA's potentially valid fears. For, as Storr points out in the Telegraph article, "Stories like these remind us that there are millions of beasts armed with teeth and stingers, who can out-sniff, out-run, out-fly, out-fight and out-bite any of us. The eerie truth is that, right now, we're surrounded. As a species, we've been at the top of the food chain for so long, we've forgotten that 'humans' are mere anthropoid apes and, in distant millennia, we had to fight the feral armies to get here. In our hubris, we imagine we're an animal apart."

If it turns out animals are attacking and killing humans as retaliation for our arrogant attitude, my fear is that people will see this as all the more reason to massacre them in even greater numbers. When humans feel in immediate danger, their capacity for reflective thinking basically defaults to the "fight or flight" instinct—it's me or him, us against them—rather than compassion. Consequently, people may not understand or care that we humans are causing this aberrant violence by abusing animals so terribly, and that we might therefore be able to reverse it by treating the planet and its inhabitants decently.

Humans too lash out with lethal force against other humans who they perceive to be oppressing them: we generally call these people terrorists. And what have their horrific suicide bombings and televised beheadings of infidels wrought? Panicked, we Americans forfeited some of our most precious civil liberties in the name of safety, and our President initiated a preemptive war based on falsified claims that has cost thousands of lives, trillions of dollars and our moral standing in the global community. The question is, has all this destruction brought us closer to peace and security or mutual annihilation?

For myself and others, 9/11 was a wake up call that signaled a desperate need to prevent future tragedies by questioning what drives terrorists to take up arms in the first place. Could America's oil-dominated economy (which necessitates a foreign policy of kissing up to Middle Eastern dictatorships) have some role in creating the horrendous living conditions endured by millions in the Persian Gulf? Does our country really respect the peoples of the Middle East, or do we undermine their freedom by financially and politically supporting harsh regimes where dissenters are systematically imprisoned, tortured and executed for speaking truth to power?

Likewise, given all that we do to animals, it should not surprise anyone that they'd want to take revenge on us: the real question here is, do they have the ability to knowingly and collectively strike back at humans based on this motivation? If the answer is yes, then this war between us will only escalate, because it seems unlikely that humanity will be accepting animals as equals on this Earth anytime soon. Therefore, consider: if animals and humans really do start fighting an all-out war against one another, which side will you be on...and, as a human being, will you even have a choice?

* Bekoff's response to this blog entry is included in the Comments section below.