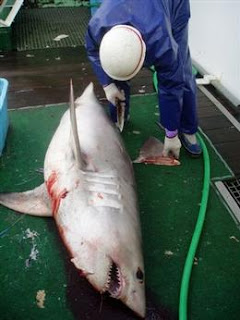 Also call and write President Obama urging him to aggressively promote an international shark finning ban, as only 33 of the world’s nearly 200 countries have instituted regulations against shark finning, and enhanced enforcement around the world is needed to stop sharks’ downward spiral toward extinction.
Posted by Mat Thomas at 7:49 PM