Close Encounter of the Turtle Kind

“I know up on the top you are seeing great sights, but down at the bottom we, too, should have rights.”

– From Yertle the Turtle and Other Stories, by Dr. Seuss


Today I went to one of my favorite San Francisco writing places: a semi-private nature-nook in Golden Gate Park partially obscured by trees overlooking South Lake. It’s one of those special spots in the city where I 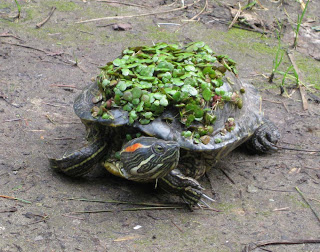 can usually find some small semblance of solitude — only this time, a Red-eared slider, measuring about seven inches from nose to tail, had already claimed it as his* own. He was resting stock-still on the moist earth about 20 feet from the water’s edge, apparently just chilling out by the bench. I’d have expected a turtle to scamper away when I came along, but he just stood his ground even as I sat down.

At first he had his back to me, facing the lake, and retracted his head and limbs into his shell at my slightest movement. But after a few minutes, he suddenly turned himself around and stared straight at me for a good long stretch of time. Though I commonly spy wild turtles while hiking in the park, none had ever explicitly acknowledged my existence before, so I wondered what was up. Was he sick, and seeking my assistance? Or maybe someone had been feeding turtles here so that they’d become tame, and he was expecting a treat from me? Perhaps he was merely curious and wanted to study the bizarre biped in his midst, or aggressively drive me away from his territory?

The turtle’s behavior reminded me of my cats, Zelda and Jasmine, who sometimes perch on tabletops right in front of me about arm’s length away and stare hypnotically into my eyes with an oblique expression as though they’re trying to psychically beam some divine feline secret 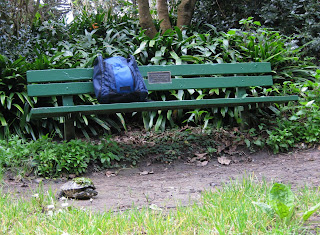 directly into my mind: but what? I just affectionately stroke their soft pliable ears and scratch under their fuzzy chins — but of course did not try this with the slider, cute as he was, wishing to respect his personal space and knowing that the bite of these particular snapping turtles is powerful enough to sever fingers. Yet I had the distinct impression that he was signaling me, as one conscious being to another. I was unable to comprehend whatever message he might have been trying to convey, however, being woefully ignorant of his obscure reptilian language.

Anyway, given this turtle’s unusually stationary stance (and the Chia-like plants growing on the front half of his shell), I was concerned that he might be ailing, so I eventually called San Francisco Animal Care and Control on my cell phone for advice. A very friendly officer assured me that it’s not uncommon for turtles to sprout foliage, and that he probably just wanted to sun himself (even though we were in the shade). As to why he hadn’t retreated upon my approach, the officer explained that the turtle would probably return to his watery habitat once I departed.

“Red” and I hung out there together for over two hours, until I opted to resume my hike through the park. But first I decided to test the ACC officer’s theory by only pretending to leave, hiding behind some nearby bushes along the footpath in wait. Sure enough, my temporary companion soon sauntered back toward the lake, as you can see in my (obviously) unedited minute-long video documentary chronicling his epic journey:

* Judging from the long fore-claws and thick tail, I believe this particular turtle was a male.
Posted by Mat Thomas at 5:08 PM